What We Do > Community House Players History

The origins of The Community House Players date back to discussions to renovate and expand The Community House in the late 1990’s. Trustees Dick Johnson and Gerry Sweeney suggested that Kettering Hall be included in the facelift so that theatre and other arts programming and events could be offered on a regular basis. It seemed only natural to build upon what was fast becoming a tradition at The Community House; The Community Revue, an orginal musical spoof of our area created in 1996 by Gerry Sweeney. Titled In Your Fascia, the first revue opened in 1997 and poked good natured fun at the zoning board, Hinsdale residents and their foibles, as well as Hinsdale’s teardown explosion. It was, in three words – A Smash Hit.

By 2000, the roast-like revues coupled with the million dollar renovation of Kettering Hall spawned The Community House Players, formalized through a business plan by Norm Chimenti, Dick Johnson and Jay Tuthill. A theater company board of directors was formed including Chimenti, Johnson, Tuthill, Linda Riordan, B.J. Chimenti, Jim Slonoff and Tony Carmignani.

In 2002, the first Broadway musical, The Music Man, opened in the summer to rave 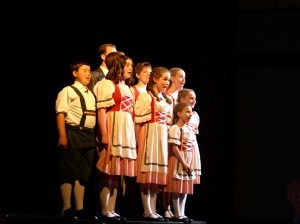 reviews. Since then, Grease, Sound of Music, Guys and Dolls, Joseph, Pirates of Penzance, 42nd Street, Oliver, ANNIE, and Bye Bye Bridie have received critical acclaim. Every summer as many as 200 people of all ages come to audition from over 30 suburbs.  And now we’ve added our own original production Broadway OUR Way to our season to showcase rising star vocal talent and the always entertaining West Suburban Symphony Chamber Orchestra. In addition, every other year, The Community House Players write and produce a brand new community revue.

The Community House Players subsists solely on ticket sales, concessions, ad sales and private donations. To date, the theatre company has made an impressive amount of money that is immediately given to a great cause – The Community House.

Over 200 inspired artists participated in programs as part of the newly expanded Ly Hotchkin Arts Program launched in 2017. Programs range from dance to comic book illustration and span from pre-schoolers to adults.